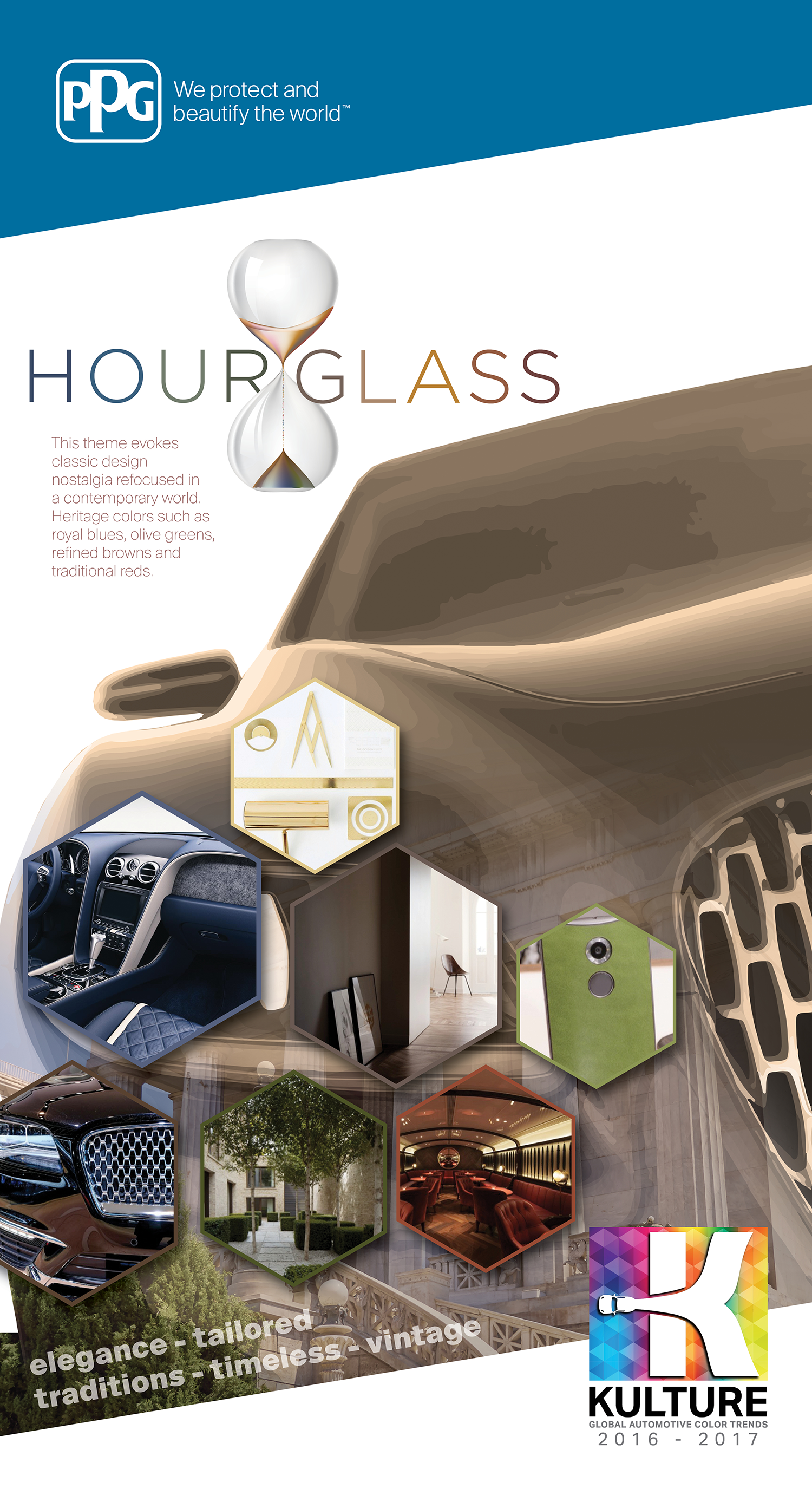 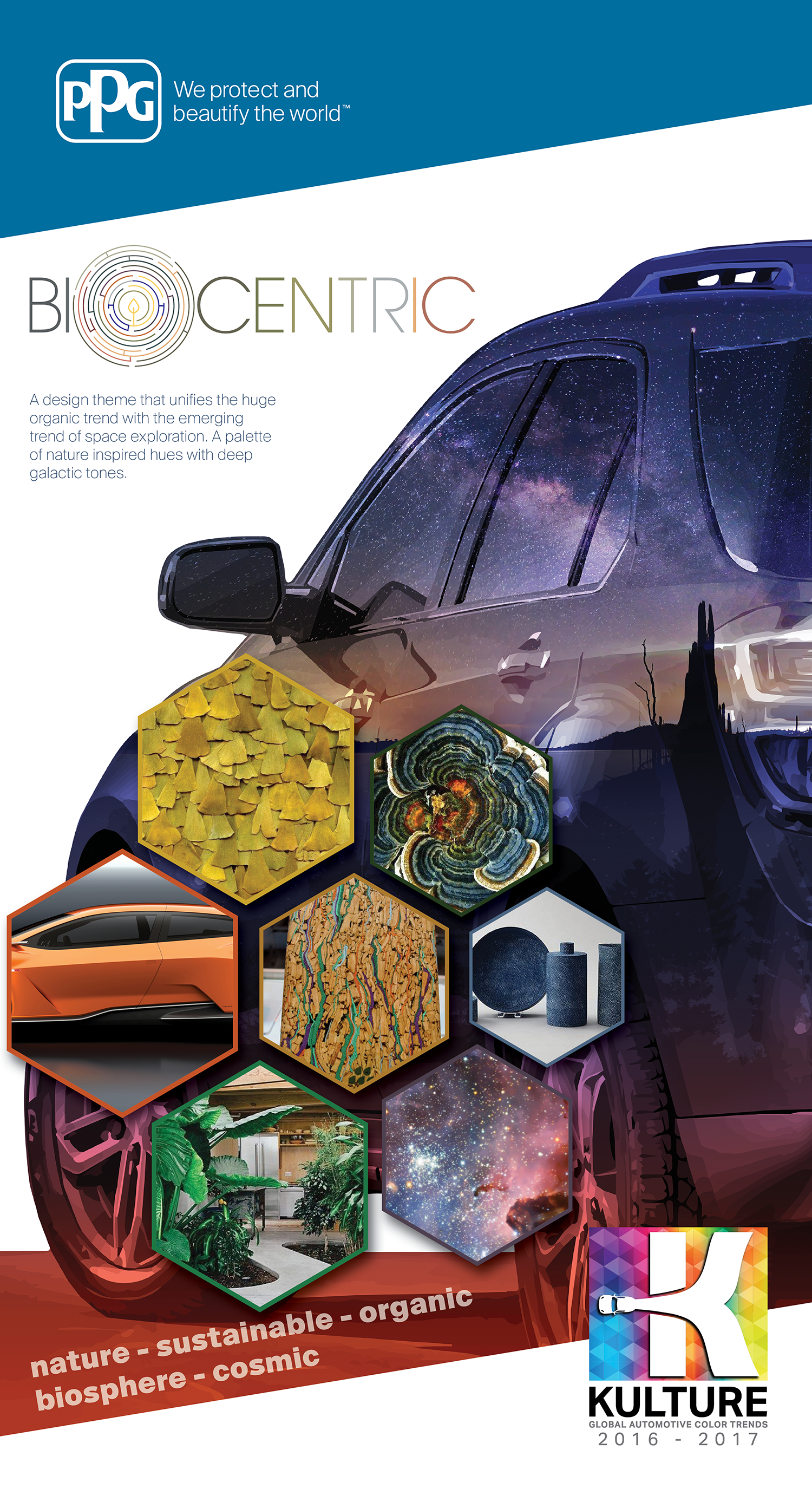 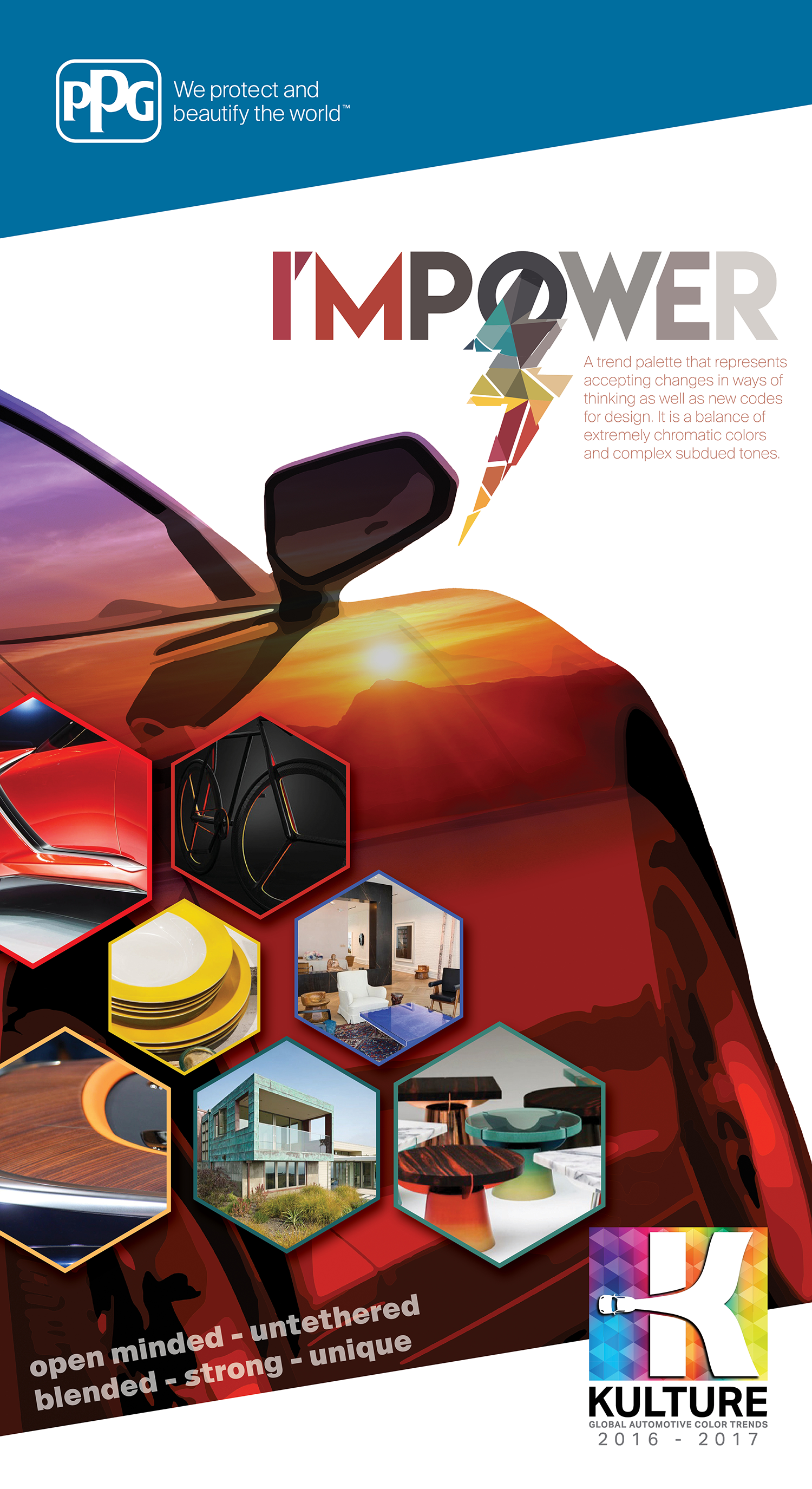 – Hour Glass evokes nostalgia for classic design but is refocused for the contemporary world. It consists of heritage colors such as royal blues, olive greens, refined browns and traditional reds.
– ES/Sense reflects the idea that “less is more,” where simple, pure design and living in the moment are key. The subtle pastel and ceramic hues in varying degrees of saturation suggest a reaction against overexposure to social media and technology.
– IMpower represents a response to new ways of thinking, as well as new codes for design. It is a balance of extremely chromatic colors and complex subdued tones.
– Biocentric unifies the pursuit of an organic lifestyle with the emerging trend of space exploration. It offers a palette of nature – inspired hues with deep galactic tones.
PPG engages a global network of more than 20 color experts with a focus on automotive, architectural, aerospace and consumer – products markets. These specialists analyze design trends, consumer preferences and priorities across regional, cultural and global markets to determine factors that will influence future color choices. The new colors and palettes introduced this year for automotive manufacturers reflect developments across these markets and influences. White remained the most popular global vehicle color at 38 percent, up from 35 percent last year. Black (16 percent), silver (12 percent) and gray (10 percent) rounded out the top automotive colors worldwide. And although PPG research found that nearly 60 percent of U.S.
and European consumers identified color as a major factor in their vehicle – buying decisions, the popularity of blue, green, natural and red vehicles
remained unchanged from last year.
PPG regional trend highlights from 2016 vehicle build data include:
– North America: White (25 percent) eclipsed black and silver (tied at 19 percent), gray (12 percent), and red and blue (tied at 10 percent).
– South America: White (37 percent) was close to the global popularity level, with silver (29 percent) a strong second. Black (12 percent), gray (10 percent) and red (8 percent) rounded out the top five.
– Europe: White (33 percent) was followed by gray (18 percent), black (16 percent), silver (10 percent), blue (8 percent), and natural and red (tied at 7 percent).
– Asia Pacific: White (47 percent) led by a larger margin than in any other region, while black (14 percent), natural (11 percent), silver (10 percent) and red (7 percent) trailed.
“Although white dominates vehicle color globally, there is more variety in color preferences by market and vehicle type,” said Jane Harrington, PPG manager, color styling, automotive original equipment manufacturer (OEM) coatings. “For example, in North America, silver is the leading color for compact vehicles, while black is preferred for sports cars. Metallic colors are popular with American and European men, while women from those markets prefer pearlescent effects on their cars.“
These differences underscore the importance of working with our automotive customers to develop distinctive colors and effects that will appeal to a brand’s targeted buyer in a specific market,”she said. Looking ahead to the 2017 -2018 model years, Harrington said PPG is seeing an increase in blue. “For instance, in our 2016 data, blue increased by 3 percent on luxury, midsize and compact cars. Also, blue was very noticeable the last three years at the North American International Auto Show in Detroit.
Concept vehicles and new model reveals included the Porsche 911 Targa in Saphirblau in 2014, and the Ford GT Super Car, Mustang, Fusion and Focus in a striking layered blue in 2015. And at the 2016 show, the beautiful Buick Avista concept vehicle captured the Eyes On Design award in an amazing Deep Sapphire Blue.
“Blue is a very versatile color for the automotive market, because subtle shifts in hue, chroma and flake appearance of a blue coating can do a lot to enhance a vehicle’s style or distinguish a brand,” Harrington added. To learn more, visit www.ppg.com