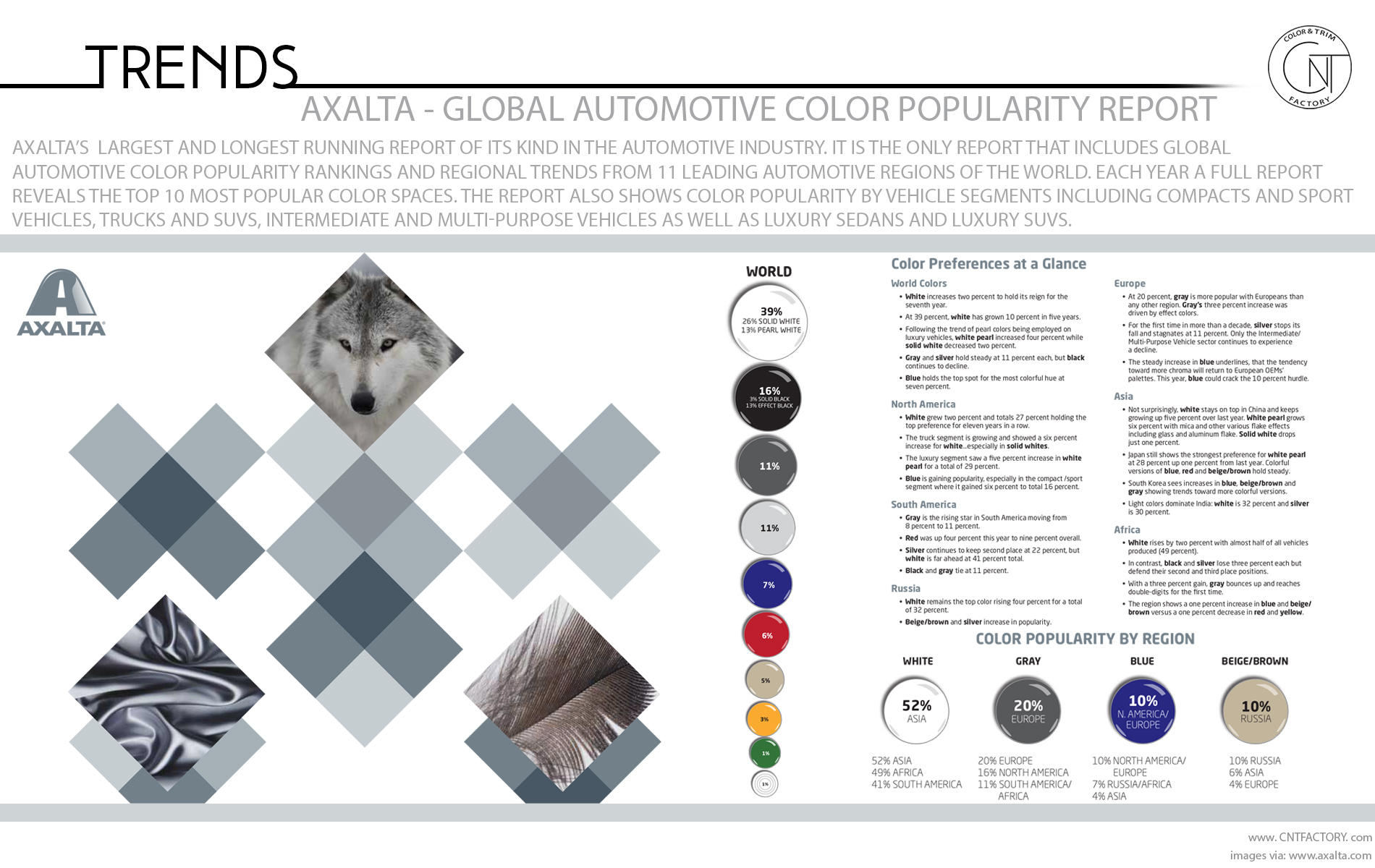 Color Preferences at a Glance

“With its modern appeal, white continues to be the top seller worldwide,” said Nancy Lockhart, Axalta Global Color Marketing Manager. “Pearlescent whites gained four percent in popularity this year as this multi-coat color is used on all segments and has the highest usage in Japan. Overall, light and bright colors continue to gain strength as light gray and light to medium shades of blue have increased interest in the market.”

Published annually since 1953, Axalta’s report is the automotive industry’s longest running and most comprehensive color account. It is compiled and designed by Axalta’s color experts around the globe to provide OEMs fascinating and relevant insights into consumer preferences to help them make informed color decisions.

“Automotive color evolves over time,” says Elke Dirks, Axalta Automotive OEM Color Designer, Europe, Middle East and Africa. “Recently, blue has been trending in various versions from highly chromatic shades to light metallic colors, and gray has been on the rise as the next competing neutral.”

“White is the undisputed number one, but the story does not end there,” said Annie You, Axalta OEM Color Designer, China. “Our customers value the subtle trends the report unveils. For instance, buyers in India prefer silver more than any other region at an amazing 30 percent. Overall, more white vehicles are produced in China than any other region, of which 47 percent are solid white, and 15 percent pearl white.”

“Axalta’s annual color initiatives, which include this Popularity Report, our annual Color Collection and the Automotive Color of the Year are beneficial to car manufacturers who are interested in using these insights to innovate,” said Lockhart. “In addition, Axalta has more than 150 years of expertise with an international team of designers and scientists that are solely focused on the fusion of technology and design.” 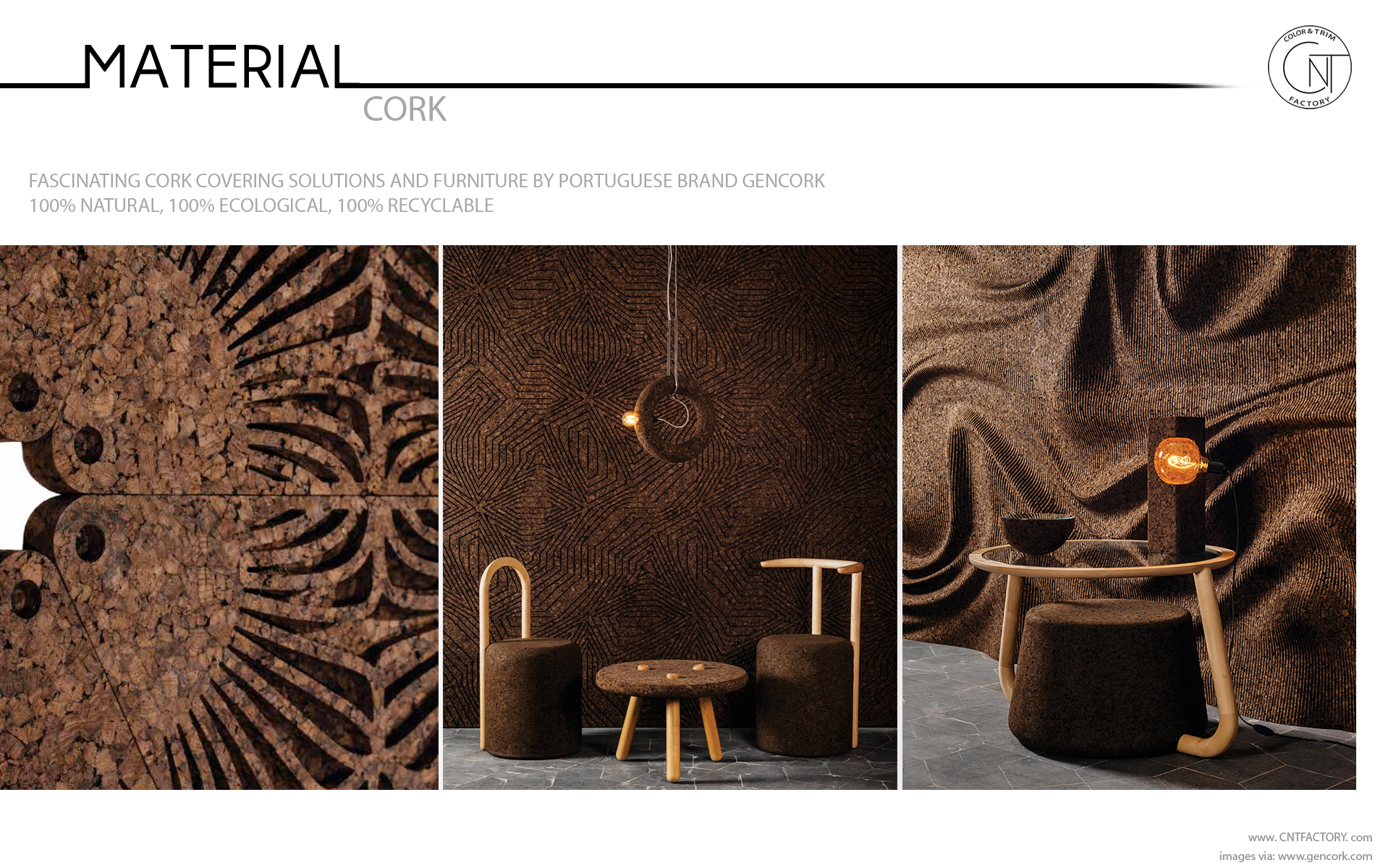 Posted at 05:04h in Materials by CnTFactory 0 Comments
2 Likes
Share 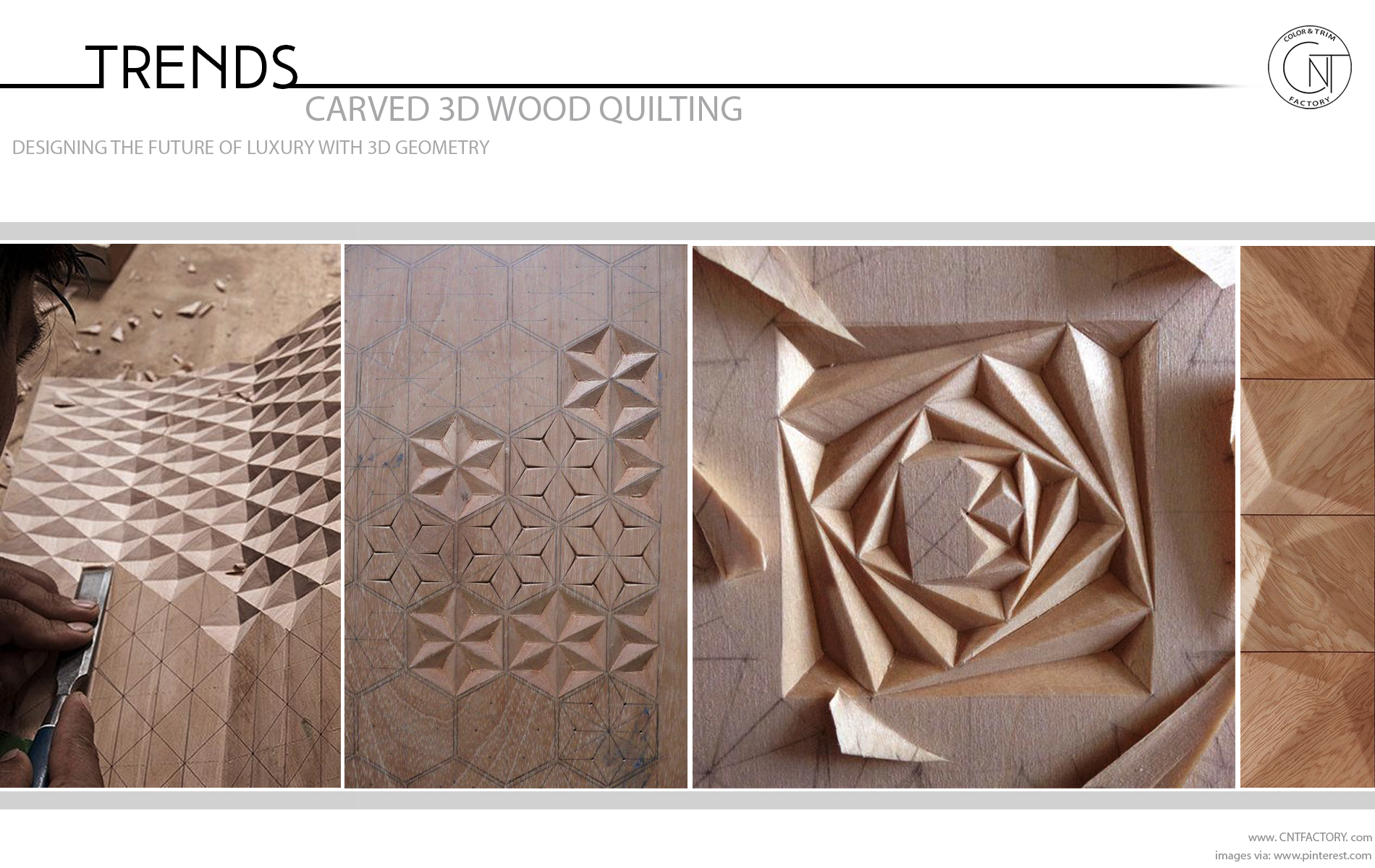 Continuing the fusion of traditional materials and contemporary design statements, the doors of EXP 10 Speed 6 feature 3D quilting, milled directly in to solid straight-grain cherry wood. Each resulting diamond is finished with a copper center. The center console integrates digital information with tactile... 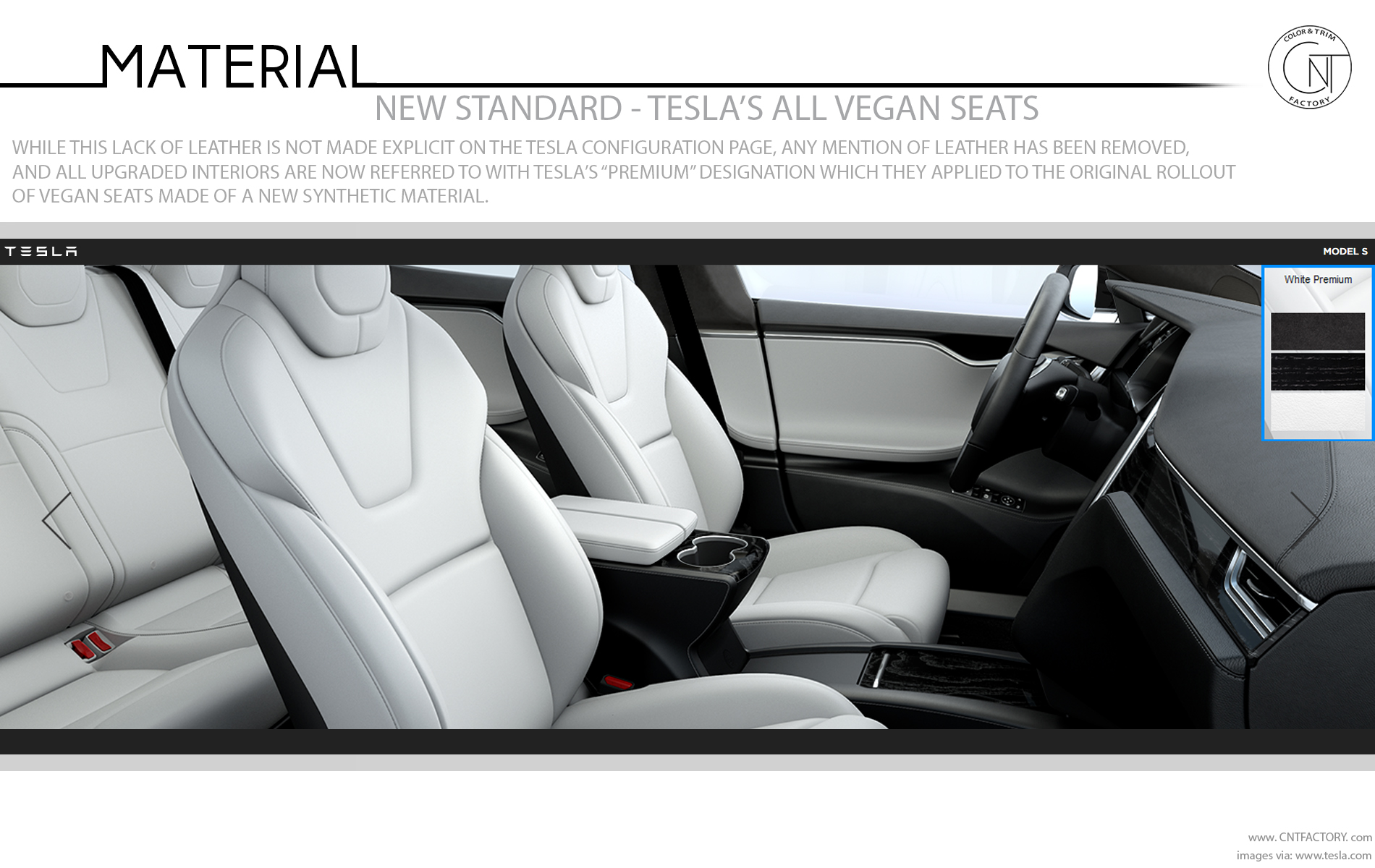 While this lack of leather is not made explicit on the Tesla configuration page, any mention of leather has been removed, and all upgraded interiors are now referred to with Tesla’s “premium” designation which they applied to the original roll out of vegan seats made... 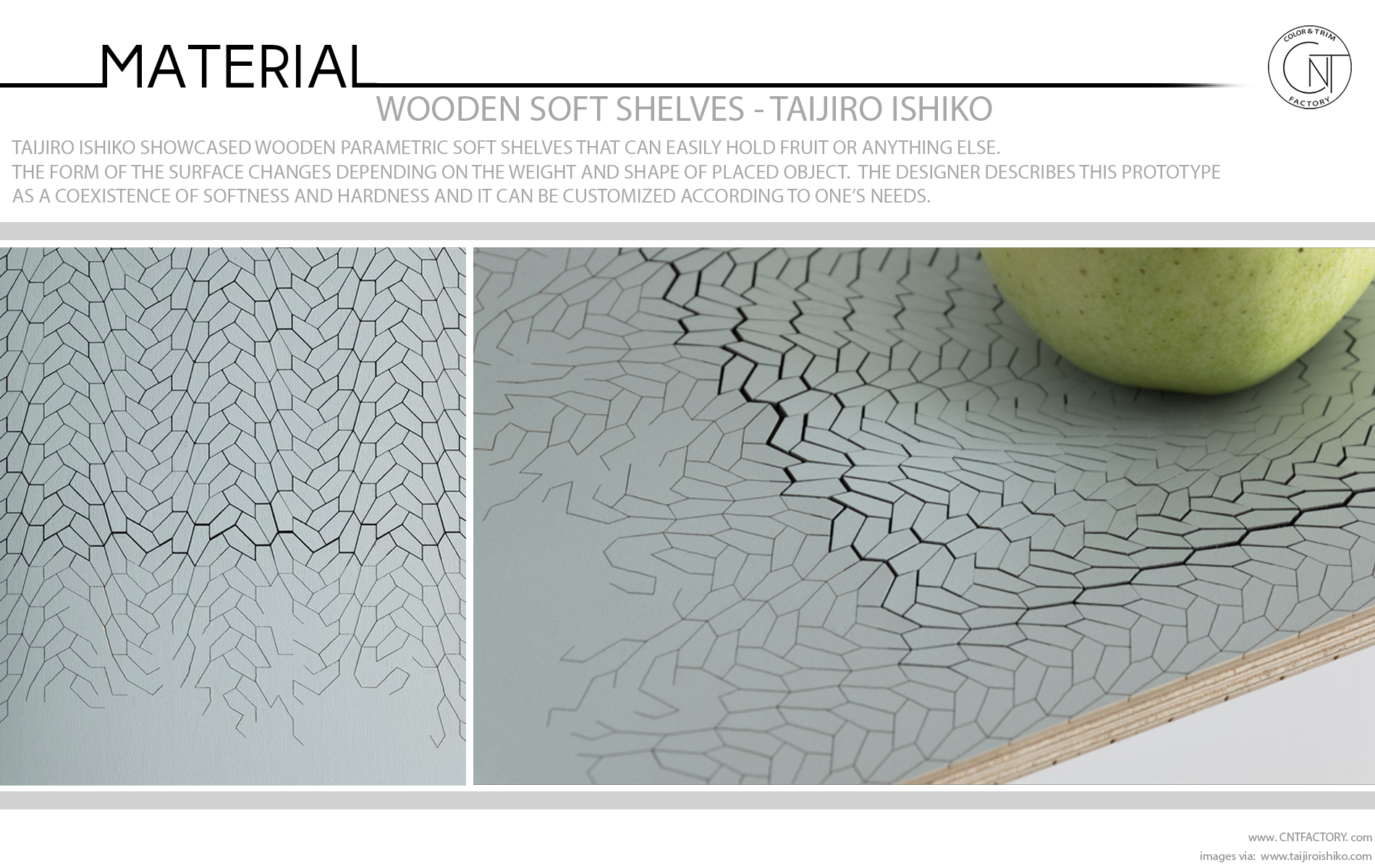 Related Posts: Tenderwood / Lasercut Flexible Wood / Textile like Flexible Wood The shlves are made of wood, and yet they gently change shape to welcome a fruit. Taijiro Ishiko worked on the material, so that it could adapt to the object, it is all the more...